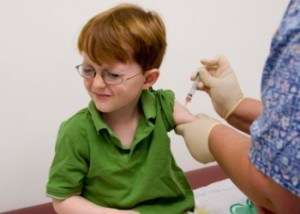 What Happens To Children Injured By Vaccines

Parents may not know about kids who have been called the “83 Canaries”. These are some of the children whose families have been quietly compensated by the US government’s Vaccine Injury Compensation Program (VICP) for their children’s vaccine injuries and deaths. Their parents are speaking out, and according to attorney Mary Holland at the Elizabeth Birth Center for Autism Law and Advocacy (EBCALA), it’s just the tip of the iceberg.

Vaccines are regarded as no less than life-granting elixirs of modern times, the dividing line between a safe and secure health trajectory for our kids, and certain death from diseases of yore. But cracks in that comfortable veneer have surely formed, giving a sense of the inevitable to what was once inconceivable. Have we tapped out the usefulness of vaccines?

Pharmaceutical industry scientist Helen Ratajczak recently spoke out – “I’m retired now. I can write what I want” – about how the MMR vaccine could in fact plausibly induce autism. CBS News recently proclaimed that the vaccine debate is far from over. Despite relentless “vaccines are safe” mantras from talking head TV doctors and government officials, parents now express more concern about vaccination than anything else at pediatric visits. In defiance of studies insisting no link exists between routine childhood vaccines and disastrous brain injuries or autism, scientists determined to be heard continue to publish findings that vaccines do cause trouble: Stuff like this retrospective that found boys were nine times more likely to end up with developmental disability when given newborn hepatitis B vaccination. Or this particularly chilling one – a prospective case controlled study in monkeys – showing the US schedule of vaccines, as is now given to our children, inducing neurological and gastrointestinal injury akin to that seen in autism, in the entire test group. Yet another chink in the vaccine armor was this analysis showing worsening infant mortality with increasing doses of vaccines.

None of these studies quibbled about mercury or aluminum, toxic heavy metals routinely added to vaccines. Both metals have checkered pasts that link them to autism and Alzheimer’s disease. Debunking efforts have stumbled here too, once the public understood that Paul Offit, poster-doc for the vaccine industry (and patent holder on vaccines himself), was touting data on kids given mercury-containing vaccines against kids given aluminum-containing vaccines. The incidence of autism in both groups was comparable – which doesn’t prove vaccines don’t cause autism, as Offit has misled millions to believe. It may simply mean that aluminum is just as potent a neurotoxin as mercury. Meanwhile, most parents (or pediatricians) don’t realize that vaccines are never tested against placebos at all. They are tested against other vaccines, an industry-friendly oddity permitted nowhere else in all of medical scientific methodology.

Adding insult to injury, one of the investigators on the CDC’s crown jewel study – commissioned to disprove the MMR-autism link – was just indicted by a federal grand jury for fraud and money laundering with funds intended for this very project. This came to light after many a harsh rebuttal to the study for its flawed methods. Last but certainly not least came the news that this study was a fix all along: E-mail communications emerged showing collusion between the CDC and study authors to obfuscate true increases in autism occurring with more mercury exposures from vaccines.

Then: In August 2014, a CDC scientist named William Thompson who reviewed data for the CDC’s “there’s no problem here” masterpiece study said this: “I’ve stopped lying.” He admitted to data manipulation, crafted a decade ago, to hide findings that autism risk more than tripled in African American boys receiving MMR vaccine on the recommended schedule.

And now this. A cluster of parents who managed to survive Vaccine Court – a little known corner of hell reserved for those whose children are injured or killed by vaccinations – have banded together to speak out. Vaccine Court is where you end up if you know enough to file a claim for a child’s vaccine injury. Since the pharmaceutical industry won itself total freedom from liability for vaccine injuries or deaths in the 1980s, and since the Supreme Court solidified this protection by removing parents’ rights to pursue civil court appeals just this year, families are left to make claims with the government when the unthinkable happens to a baby or child who is dutifully submitted for shots. Since 1986, individuals could no longer sue a pharmaceutical company or physician for an injury from a vaccination. Instead, a tax was added to the sale of each vaccine, and paid into a fund to take care of children whose families win injury claims in the vaccine court system. That is, if parents know of and pursue their rights, and if they prevail in this court system, which is not part of our usual judicial system. There are no juries, just “Special Master” judges, whose only job duty is hearing vaccine injury cases. The rules are different too – medical malpractice awards and process do not apply.

For years, at the same time we’ve heard assurances that vaccines are safe, the federal government’s Vaccine Court has quietly paid millions to families whose children suffered devastating brain injuries from routine shots. “Quiet” is the operative word here, as parent Sarah Bridges, who holds a PhD in psychology, explains: She was advised “very routinely” by her lawyer to “be careful talking about this” lest her son’s custodial funds evaporate. At risk of losing their hard won compensation, parents are now speaking out, and revealing that their children were the canaries in the coalmine. Ms. Bridges’ son for example, who is now seventeen years old, has mental retardation, epilepsy, and autism thanks to infant vaccinations, and lives in a care home wearing a diaper and a helmet thanks to the compensation program paying for it all.

This is bad news for anyone who feels unsafe without vaccines.

I don’t feel afraid without vaccines. Even with a master’s degree in public health, and years of university training in health sciences, I am relieved to see what may be a tipping point here.

Truth, ethics, and transparency have been lacking in our vaccination program. According to the this review, there is much more carnage from vaccines than we acknowledge as a society. And now it’s plain, transparency is lacking in the program that compensates our injured children too. Besides the unstoppable worries about whether vaccines are safe, we add the question: Are they really necessary? Which ones? How many? Maybe vaccines have done less than we think – and haven’t actually prevented disease much at all, as we have so enjoyed believing for almost a century.

About my training in nutrition science and practice, and public health: I noticed it sometimes fell at odds with itself. In one class I’d listen to a lecture by an epidemiologist (with a PhD) explain how fabulously successful vaccines have been in eradicating disease (I believed what I heard). In the next, I’d listen to another expert (a PhD nutritionist and registered dietitian) present how intricately connected nutrition and immune function are, especially in the first years of life. Decades of data illustrate how small shifts in a baby’s nutrition status can set up a deadly cycle of infection and more malnutrition. Plenty of pedigreed work exists to show how effective breastfeeding is at combating infectious disease exposures for infants. The stellar performance of breastfeeding for beating diarrheal diseases in infants – a top killer in the developing world – is legend in public health nutrition circles.  Do we really need vaccines for this? When vaccines trigger more in chronic disease and disability than they prevent for acute infection, the risk benefit ratio has moved in the wrong direction.

Meanwhile, more integrative medicine strategies evolve every year – tools that rely less on drugs and surgery and more on whole organic foods, reduced toxins, nutraceutical strategies, or other modalities. Witness the success of vitamin D in preventing and shortening course of flu, for one small example out of hundreds, that illuminate the potential of pharmaceutical and toxin-free strategies to minimize infectious disease.

These strategies tend to be unpopular with the medical press and our government health agencies. What that means is that if the bloom is off the vaccine rose, they are going to be the last to admit it – but that’s another blog. In the meantime, be a smart health consumer for your own babies and kids. Read alternative views on vaccination, tap providers trained to engage nutrition-focused tools for healthy immune function. If you want to opt out of the vaccine schedule in whole or in part, you can

–  Check your state’s mechanisms for vaccine choice by clicking here.

–  Switch to a family practice physician, osteopathic doctor (DO) or a naturopath (ND), if your pediatrician is coercive about vaccines beyond your comfort level.

–  Read Special Needs Kids Go Pharm-Free: Nutrition-Focused Tools To Minimize Meds and Maximize Health and Well Being, even if your kid isn’t diagnosed with a special need. See the chapter on avoiding infections, and the section on working with providers to help you through infections when they occur.