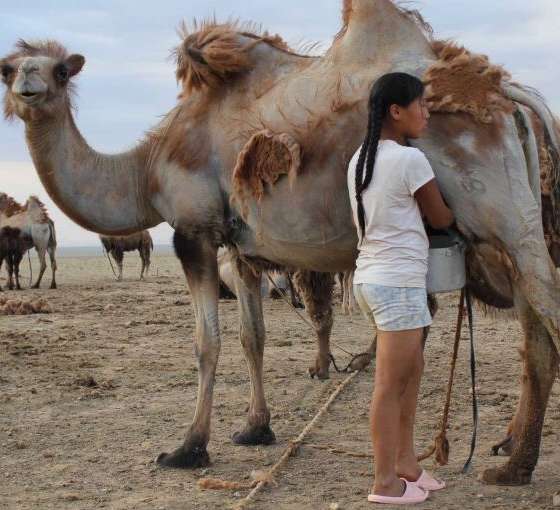 There has been buzz for years now about camel milk, and its purported benefits for autism, Crohn’s disease, allergies, feeding problems and more.

I’ve been slow to embrace this possibility, because all mammalian milk (including human breast milk) contains milk protein – that is, casein – and casein can become problematic for many reasons. Casein structure varies a bit from species to species or even across breeds of animals in the same species (as described in the A1 versus A2 milk conversation).  This is what can make goat milk or sheep’s cheese more tolerable than cow’s milk for some kids. But all these milks – including human breast milk – can make a neuroactive protein fragment called casomorphin.

I’ve needed a good explanation for why this is not a problem with camel milk, and I found it. Here’s the story.

Camel milk truly is different from milks that we make, or cow, goat, or sheep milk too. Here is a detailed comparison of what’s in camel milk versus human breast milk. But one thing all mammalian milks have in them is a protein called casein, which is often allergenic. Even as casein varies across species and can be easier to tolerate depending on the animal it comes from, generally, all casein can turn into a littler protein chunk called casomorphin. This can be a big trouble maker.

Casomorphin is great for babies in their first year. It is correlated with optimal psychomotor skills and muscle tone. But it can wear out its welcome, when a child’s intestine doesn’t acquire the skill to digest it thoroughly, past the age of 12-14 months. I routinely see this in my practice, in milk-addicted kids: Constipation, delayed language or aphasia (non-verbal), extreme picky eating, tantrums, ADD/ADHD, disrupted sleep, and behavior problems can come from a diet that uses mostly casein as a protein source. When those signs are active, kids are usually turning that casein into casomorphin, which is potently addicting, making for an extremely picky appetite, causing constipation and terrible behavior. If this is your kid, buy this e book. You’re welcome. It will save you a lot of time, pain and agony in feeding clinics, GI doctor’s offices, or in surgery avoided for a G-tube.

Casomorphin is easy to measure in urine. I have found it in the urine of older toddlers still breastfeeding, who strictly avoid dairy foods in their diets otherwise, and whose mothers strictly avoid dairy too – proving that the casomorphin indeed can come from weak digestion of the protein in breast milk. In these cases, weaning to non-dairy proteins in food did the trick.

Casomorphin is a “powerful opioid, more powerful than morphine itself“. It blunts sensation, and can delay potty training; it also prevents a process called synaptic or neural pruning, in which the brain adjusts its growth to accommodate new developmental phases. Without pruning, kids’ heads grow disproportionately large, and development – especially for language and social reciprocity – can stall. It’s common for me to see this phenomenon in children with autism who have had diets liberally inclusive of dairy protein, whether it’s from milk, cheese, yogurt, ice cream or whatever – all these dairy products contain casein. Gluten and soy proteins can form morphine-like neuroactive peptides too, in the context of weak digestion. These have been linked to autism features, for many years now. This is why kids with autism may begin to speak, function, behave and sleep better by removing wheat, dairy and soy foods entirely – stop eating opiate like neuropeptides, and their brains begin to work again.

What about camel milk? It turns out that the casein in camel milk is different enough in its structure to not create casomorphin, the opiate-like neuropeptide I’m talking about – while at the same time, its other components are also unusual – making for some extra healing benefits. It doesn’t have the same casein structure that cow’s milk has, and thus can’t create casomorphins that have brain-damaging potential, as is seen in autism. Camel milk lacks the beta-lactoglobulin found in cow milk; that, plus its different casein structure, means that the two most allergenic proteins in cow milk are absent from camel milk. The whey proteins of camel milk are different too, making them less allergenic. And camel milk has higher amounts of the immune protecting proteins lactoferrin and immunoglobulin than cow milk – though some dispute that the difference is enough to explain the medicinal benefits. But because camel immunoglobulin molecules are tinier than those in cow or human milk, and because they appear to be more potent in completely neutralizing an infectious agent, they can more easily target and disable viruses or bacteria in the gut. Traditionally, one of its many uses was for clearing rotavirus – something your child was probably vaccinated for, as rotavirus vaccines have been included in the CDC schedule since 2008 (look for RotaTeq on your child’s vaccine record). Who knew all they may have needed was camel milk?

Little data exist for its healing properties, but the little that is out there is compelling. A controlled clinical trial in fourteen children with autism who drank pasteurized camel milk instead of cow’s milk for eight weeks “revealed a decreased hyperactivity, increased alertness, grasping power and curiosity, better social interaction and many parents commented on the newly expressed effort of their children to listen and obey instructions.” The children also had daily bowel movements instead of being constipated, and got sick less often. Urine samples showed no elevation of beta casomorphin-7, the trouble-maker molecule in question for milk drinkers. In a larger, double blind, randomized trial of 65 kids with autism, profound improvements were once again noted, from just two weeks of camel milk consumption. And yet another blinded and randomized trial in 60 children with autism found that camel milk significantly reduced oxidative stress (a well documented feature of autism that underlies behavior problems, GI symptoms and more) while it gave a boost to the kids’ glutathione levels, which is a healthy body’s top protector against toxins. Glutathione is legendary for being depleted in kids with autism, and has been the target of much investigation, since correcting it may diminish features of autism. Glutathione is also a key to reducing symptoms of Crohns disease; a healthy gut wall is rich in this antioxidant, while a sick one is depleted of it.

Another obscure report lauds camel milk as a wound healer in diabetes; other findings suggest that camel milk has enough insulin-like peptides in it to effectively lower blood sugar. Meanwhile, here’s that nasty casomophin from cow milk again, possibly triggering diabetes. I found no trials specific to food protein induced enterocolitis syndrome (FPIES), but did find one that plainly showed that most kids with milk protein intolerance handle camel milk just fine, and that skin prick testing worked to screen for this option.

While controlled trials are few, anecdotes are plentiful on the web, describing remarkable improvements in children with autism who switched to camel milk. Here is a collection of some research on camel milk nutrition and how it can work for kids with other-milk allergy.

This all sounded good enough for me to spring for $275 worth of frozen camel milk (it doesn’t come cheap). I’m going to try this out. My son has a long history of inflammatory bowel symptoms and struggles to gain weight; I have a long history of autoimmune problems and am dependent on infused human immunoglobulin therapy to, well, pretty much stay alive. If anyone had good reason to give camel milk a try, I do. And there are a few hundred kids in my case load who might benefit. I like to have first hand experience with whatever I recommend to my families.

The only dromedary dairy in my region was cryptic and unfriendly when I reached out; they wouldn’t let me visit or purchase in person, so I passed. Besides, knowing that the entire Front Range of Colorado is under siege from cancer causing fracking contaminants in air and water, I felt it would be better to buy a product from somewhere else. Camel milk isn’t sold in stores near me as far as I could find, so I went with the one outfit that seemed well equipped to produce, sell, and ship milk reliably: Desert Farms. Stay tuned to hear how this goes! Should be interesting. As a recipient of immunoglobulin therapy, I am monitored closely every three weeks for my immune status, so I will be tracking what happens. Let me know how camel milk worked for you, if your family tried it!