Autism: It’s About Potential, Not Neurodiversity 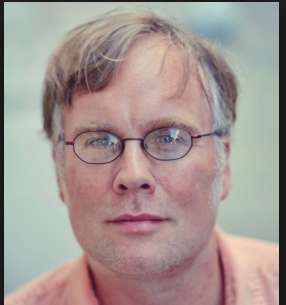 John Elder Robison’s announcement that he is walking away from his role on Science and Treatment Boards at Autism Speaks invokes another conversation about the N-word.

“Neurodiversity” is a word that splinters the autism community. Functional individuals with Asperger’s syndrome or high functioning autism resent the insinuation that an autism diagnosis is a problem that needs fixing. They are lucky individuals for whom a spectrum diagnosis bequeaths more gifts than losses; they self-identify as “neuro-diverse”, not handicapped. No one is claiming this is an easy go, but many persons with autism lead independent and fulfilling lives, and don’t want “fixing” or a cure, thank you. Indeed, in his farewell-to-Autism-Speaks piece, Elder Robison bristles at Autism Speaks’ recent Call For Action post, which went up on the web just ahead of his sign off, in part because it offended his sensibility about neurodiversity.

Because of its narrow focus on genetics and pharmaceuticals, Autism Speaks has long been more of a splinter than an amalgam for the autism community, its size and budget notwithstanding. As the most monied organization in the autism landscape, many view this as a tragic waste of time and resources, myself included. In his acceptance to the boards in 2010, Elder Robison voiced concern that “workable solutions for autistic disability are far too few”. Three years later, he gave in to what many of us already knew: Autism Speaks was not likely to change its course, feeding the pharmaceutical pipeline by hiring industry players, and making feeble-at-best efforts to actually help the hundreds of thousands individuals who have autism in the US.

In his original acceptance statement, Elder Robison also said this: “There may not seem to be much common ground between the extremes of neurodiversity and those who seek a cure, but I’ll find what there is and try to build more. I hope everyone can see the potential if we can all rally together in pursuit of a common goal.”

There. That’s the kernel of it right there, and that is where I have always worked, when raising my own Asperger’s son (now seventeen) and when working with the hundreds of children on the autism spectrum whom I’ve met in my practice. This is what I share in every speaking engagement I’ve been invited to make, and every book I’ve written. It’s about potential, not “cure”. 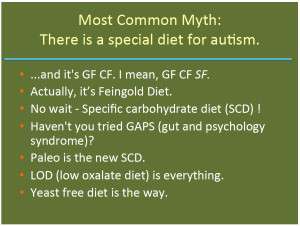 There’s no one diet, no one pill, no one way to medically support anyone including persons with autism.

If you caught my lecture at National Autism Association three weeks ago, you heard me say it: There is no “diet for autism.” Biomedical and nutrition interventions are treatments for comorbidities seen with autism – which themselves are framed by many as a downstream symptom from the synergy of toxicity, infection, autoimmunity, and malnutrition hitting the brain in utero or in developmental years. Variations in the timing, duration, and severity of this synergy will make the blow light for some and utterly devastating for others. It’s possible to mitigate these medical comorbidities found with an autism diagnosis, just as it’s possible to mitigate them found in persons without an autism diagnosis.

These comorbidities may be relatively physically asymptomatic. If that suits you and you are a successful, independent adult like John Elder Robison, well, fabulous.

If you are an autistic ten year old in diapers who struggles to speak, not so fine. Maybe you’d like a sentient advocate to help you feel and function better, so you can access appropriate medical treatment instead of stronger doses of Risperdal and Miralax that just mask and band-aid, rather than treat the problem. Maybe you can even join a regular classroom with typical peers, once you are more well. I have witnessed this with nutrition intervention many times in my practice. Did I disrespect the child’s neurodiversity in these cases?

If you are a forty year old man with bowel impaction looking at losing your colon, secondary to undiagnosed, life long inflammatory bowel disease, but you don’t even know that because you’re institutionalized with an autism diagnosis, can’t speak, and no one told you, definitely not fine.

Or, if you have an Asperger’s teen who seems to feel well enough, can you assuredly say s/he is happily expressing their potential? In that sense, having an autism diagnosis has nothing to do with anything. It’s simply about an individual’s potential, and the right to feel well, and get the care, remediation, support, or intervention one would choose, in order to lead an independent and fulfilling life. With or without autism.

In any case, the question is not “do you have autism?” The question is “do you have untreated nutritional, gastrointestinal, autoimmune, or other medical pieces that need attention?” If you don’t look, the problem isn’t there. Autism Speaks, by the way, is not doing much about educating physicians on how to look for these co-morbidities, much less treat them, to enhance the health, well being, and functional ability of persons with autism.

In my profession, there are simply people who need nutrition support. There are children with nutrition deficits that impede their brains’ ability to learn, organize, talk, understand, sleep, socialize, process their surroundings, manage overwhelming emotions, or calm down. When you support and replenish their brains and bodies with the nutrients that are meant to be there, and when you take out the inflammation and the infection and the toxicity that is not supposed to be there, they begin to realize their potential, because their brains and bodies function better. Are they “cured” of autism? Who cares? I care that they are learning, growing, happy, and thriving, period.

Rather than set off another shouting match about neurodiversity, I am pondering John Elder Robison’s understandable frustration with Autism Speaks as a spark for consensus about potential – just as he said it in the first place, three years ago. Focus on that for your family member with autism or yourself if you have autism, instead of the label. It’s not a cure or a fix to screen and treat for medical problems. It’s humane and sensible. And if it means we help people reach their potential, we have to do it.