Is FPIES FODMAPs Intolerance In Disguise? 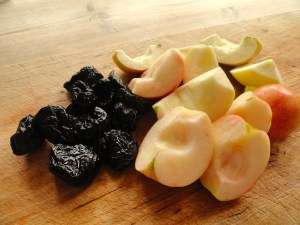 FPIES – food protein induced enterocolities syndrome – is becoming a frequent presence in my pediatric nutrition practice. There are no prevalence studies for it yet, and it has only recently been recognized with a diagnosis code. FPIES is a debilitating and frightening condition that affects young infants. When the baby eats, there is sudden vomiting and even loss of consciousness, along with watery or mucousy stools, more than the usual crying and discomfort, and poor weight gain. Blood may be seen in stool. The sudden movement of water into the gut, along with complex immune reactions, may cause a hypovolemia (low blood volume) to trigger shock symptoms. Toddlers can be affected too.

My breast-fed son exhibited these very symptoms as a newborn, just days old, in 1996. We were terrified and scrambled for answers. He would take a feeding, then just explode – with all of it coming out of his mouth and nostrils forcefully – and then he would collapse into fleeting unconsciousness. This happened three or four times in his first two weeks. We were offered zero treatment, and zero advice. We were told it was colic and that we were just nervous new parents who were probably exaggerating.

Finally my son ended up in the ER where the only offering was a work up (that failed miserably) for spinal meningitis. No one had a clue, and we were not treated well by the doctors. In fact, this was such a wreckage of a moment for us as new, trusting, and hopeful young parents that it is what galvanized me to redirect my focus as a nutritionist and help others in this frightful dilemma. I knew then this was not ordinary colic; I knew there had to be an inflammatory component, based on my training in infant nutrition (which I later learned few doctors ever get). It horrified me that any other parents or babies would be left to struggle this way. It was isolating for us, as we knew no one experiencing this (no internet!), not to mention painful to navigate the indifference of the medical community.

I breast fed on an extensive elimination diet, and my baby improved – but I was depleted, and didn’t have the skill set I have now to really do this right. Once he was transitioned to a homemade goat milk formula, he did even better, and chubbed up nicely. He began to do more of what babies do: He smiled, gurgled, cooed, chattered, giggled, slept, pooped (more normally), and generally was happier to be here.

Now I hear from parents almost every week who have little ones struggling with this same scenario. They have been given the FPIES diagnosis, but that’s about it. There may have been a few tests done, but little else to help the baby be able to eat normally and grow well. Hypoallergenic formulas, then elemental formulas, are tried. If breast fed, the babies do better when mom is on an elimination diet. But like I was, many of these families have become emotionally and physically depleted. Breastfeeding on a deeply restricted diet is hard, and introducing “safe” foods for the baby is a roller coaster. No one wants to see the baby struggle with FPIES symptoms. If all else fails, it’s on to tube feeding.

There is a huge missing piece here. What the GI community is overlooking so far, when it comes to FPIES, is the baby’s gut biome. Some screening is usually done to make sure there is no outright deadly gut pathogen in there, but that’s all. There is so much to learn about how our gut bacteria support us from birth, but we already know enough to start working with it – there is no need to wait. We know that the immune system is “tutored” by the bacteria that populate the baby’s gut. Babies who lose normal, healthy gut flora (bacteria), for whatever reason, go on to have more inflammatory conditions later in life. And in FPIES, there are clear shifts in the body’s immune cells that show a lot of inflammation is going on in the gut. Tests for kids with FPIES tend to show more eosinophils (white blood cells that are common with allergy or inflammation), more immature white blood cells (this is the body’s attempt to fight fight fight), as well as obvious changes in gut tissue that show inflammation.

What is causing it? Is it food protein? The answer is not clear. Kids with FPIES often have negative food allergy (IgE) test findings. I have found this to be true in my caseload too. When I have looked further for food sensitivity reactions (IgG) in toddlers with FPIES (babies are too young to reliably test for IgG reactions), those are often negative too. While some kids with FPIES show reactivity to dairy or soy protein, they don’t appear to do so more than the general population. And curiously, two of the most common trigger foods in FPIES are not high protein foods at all. They’re starchy foods – rice and oat – foods that are often among the first introduced to babies. So perhaps FPIES isn’t about food proteins after all.

It’s The Biome, Baby! FPIES babies in my practice have shown improvement with efforts to restore expected, healthy gut flora. While GI doctors will conventionally only rule out life threatening gut infections, I use stool microbiology tests to see if the baby has the healthy bacteria needed to develop normal digestion and immune responses in the gut. This testing also screens for fungal species (yeast), because too much yeast in the gut (aka Candida) will disrupt digestion also. And it looks for “commensal” microbes that are not necessarily pathogenic or life threatening, but potentially inflammatory, if there are much more of them than the healthy bacteria babies need.

So far, just as the literature is reporting, I also notice negative food protein reactions in lab testing for FPIES kids. But -and this is where the literature is pretty mum – in my own practice, stool testing for FPIES babies often reveals inadequate helpful flora. Candida species are not a consistent player here so far, but off beat fungal microbes pop up: Saccharomyces cerevisaie (a component of newborn hepatitis B vaccines) or Rhodotorula muculaginosa for example. But the bigger story is that these stool tests do show more of the “commensal” bacteria than expected, at least in FPIES kids I have worked with. Species like Citrobacter, Klebsiella, Hemolytic E. coli, non-difficile Clostridia, or Alpha hemolytic Strep show up, in spades. It appears that there may be more of these commensal strains populating the gut, than the healthy strains.

Is this the problem? Research needs to be done here for sure. When I work with parents to correct these findings, these kids start to improve. I help parents use probiotics, caprylic acid (from coconut oil) and gentle antimicrobial herb tinctures to balance the baby’s gut biome out. Healthy gut bacteria help digest food, and mitigate inflammation. Your doctor may think a prescription medicine could be useful here too, to aggressively clear the commensal bacteria. 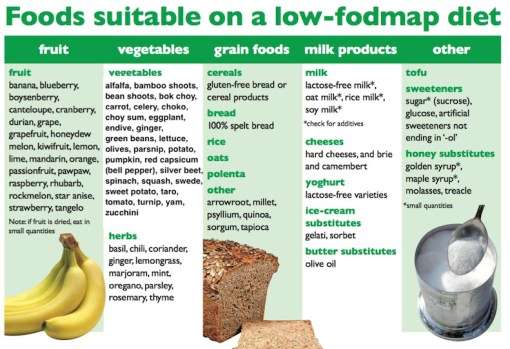 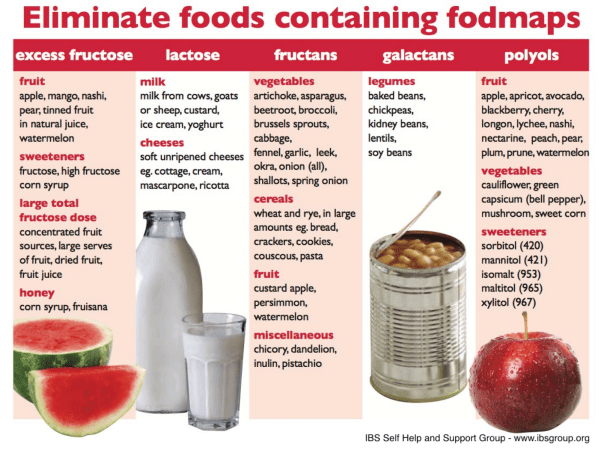 Of course, the other major tool at your disposal is food. Gut bacteria eat what we eat, and they eat first. This is where FODMAPs come in. FODMAPs stands for “fermentable oligo-, di- and monosaccarides and polyols”. A mouthful! FODMAPs are carbohydrates that we don’t completely digest. They are fermented (digested) by bacteria in our intestines. Bacteria aren’t supposed to dominate the stomach and upper small intestine (they help finish the job further along in the GI tract, after our own enzymes and digestive juices have worked on our food), but infections may situate there in the small intestine, up high so to speak, when our own digestion is weak, if immunosuppressive effects are in play, or if a recent infection or vaccination was not tolerated well.

Infections that situate in the small intestine are called are called SIBO (small intestine bacterial overgrowth). These are tricky to culture with a stool test because by the time a meal is digested and passed all the way down to the colon, the microbes that may have been busy with that meal at the start of your GI tract may not be detectable anymore – but they can wreak havoc anyway, especially when we eat foods high in those FODMAPs. Breath tests can detect these, but getting that sample from an infant can be tricky. Invasive procedures to dip-stick a baby’s stomach juices have been done, but it’s far easier to just trial some nutrition and food strategies.

Low FODMAPs foods seem to be helping babies and toddlers in my practice with FPIES. They are turning the corner with some weight gain, improving stools, and no more terrifying FPIES reactions. I shorten this list even further, by removing any foods that don’t meet criteria for Elaine Gottshall’s Specific Carbohydrate Diet (SCD). Many foods allowed on SCD are high in FODMAPs. But by limiting foods to those that meet both low FODMAPs and SCD-legal criteria, I have a short list of foods that are most likely to be easily digestible and least likely to be interesting to the commensal microbial overgrowth in a baby’s gut. 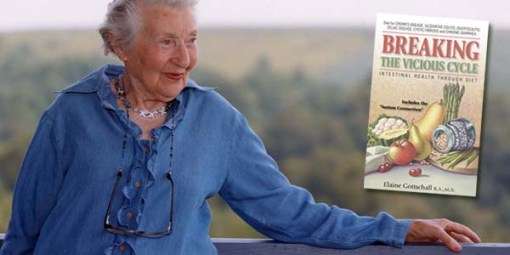 Some components of GAPS diet can work as well, but I have not seen GAPS alone to work as well as creating individual care plans that draw from low FODMAPs, SCD-legal, and direct interventions to help the baby’s gut biome with probiotics or herbs. It’s trial and error, but the parents working with me on this are the true champions who make it all possible.

Interestingly, grains like rice and oat – two of the most common triggers for FPIES reactions – are first to go when following low FODMAPs and SCD-legal food lists. Soy and dairy products are not allowed either, with an exception in some circumstances for yogurt made from raw goat milk with certain bacterial cultures.

I see rays of hope for FPIES kids, with room to leverage what we already know about irritable bowel disease, inflammatory bowel disease, the role of gut bacteria for good health, and how to use anti-inflammatory foods or anti-microbial herbs or food components. When parents are ready to roll up their sleeves and work with me, it’s a delight when things turn around. For more on FODMAPs, check out Chris Kresser’s post too. And thanks for reading this far!