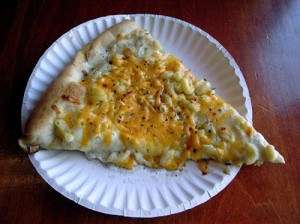 Mac and cheese pizza. For real.

According to research on growth, food intakes, and kids with autism, published in  Pediatrics, these kids tend to eat terrible diets. But it doesn’t really matter.

I have quantified food intakes and assessed growth patterns on hundreds of children with autism.  Yep, terrible diets are common for kids with autism. But after that, I part ways with the Pediatrics article. There’s so much wrong with it, it’s hard to know where to begin. But let’s start here, with this parent’s quote about how, well, preposterous this study’s conclusion is (as printed in The Chelsea Standard, Parents Adjust To Life With Autistic Child), as she describes her own child’s descent into autism:  “…he suddenly stopped talking. He stopped eating any food except for pretzels. Instead, he ate sand, wood and rocks.”

The message from Pediatrics on this lets you doctor conclude that this should trigger no particular concern.  It’s okay for kids to eat nothing but pretzels, sand, wood, and rocks. No medical intervention required.

Did the research mean to suggest this is okay …as long as a child has autism? Yikes.

I’ve seen eating patterns like this in kids with autism many times, that scenario in which a child with autism actually eats stuff that isn’t even food  – like sand, wood, rocks… or paperclips, ice from treads of shoes, dog poop – all of which I have encountered in practice, in kids with autism. Aaaaand it isn’t okay. Kids with autism are still human children, so I’m pretty sure that means that poop, dirt-filled ice, sand, rocks, metal objects, and wood are not good for them.

Any classic nutrition text describes “pica”. This research even noted that the children with autism had pica at nearly six times the rate of their typical peers – but inexplicably, the authors don’t mention that finding in their discussion or conclusions.  Mercury poisoning, lead toxicity, poor zinc status, copper imbalance, or iron deficiency tend to accompany an eating pattern like this, in any child.  Pica is not benign; it is associated with poor impulse control and obsessive compulsive behaviors – common features for children with autism – and with dangerous exposures to metals that can injure the brain. This is just one of many nutrition problems I routinely find when I complete nutrition assessments on children with autism.

In fact, in 11 years in practice, I have never encountered a child with autism who did not have a treatable nutrition problem.  They do typically eat extremely limited diets.  It isn’t unusual for me to see no more than three items on a food diary: “Gogurt x 3; chocolate milk 4-5 cups/day; plain noodles, 1 big bowl”  …and this is what a child will have been eating year in and year out.  It’s no stretch to intuit that this will leave any child bereft of adequate nutrition to learn, grow, sleep, thrive, or behave to their potential.  We would never leave a typically developing child on a diet of nothing but literally only coffee cake and milk for years (another example from my practice).

What happens to children who eat like this?  My case files illustrate that they get sick more often, become constipated, behave poorly, acquire anemia, acquire deficits of nutrients that impair them functionally, can’t focus, don’t sleep, and may not grow as expected, just for starters.  But now, we can rest assured knowing that this is okay, as long as your child has autism, thanks to this research.

I saw flaws in the Pediatrics study that let the data show – essentially, nothing.  Here’s where the study went wrong – the errors are many, and egregious:

1) The study group was disproportionately small compared to the control group: There were only 79 children with autism, but nearly 13,000 typical control children.  This diffuses differences that might exist between the two groups.  The controls will present such a wide swath of eating patterns as to make any difference with the small clinical group vanish.

2) The authors used a tool called a food frequency questionnaire that mothers filled out.  This is a nutrition researcher’s weakest instrument for assessing diets.  It doesn’t actually quantify a food intake.  Rather than tell you what nutrients a child is actually eating – how many calories, how many grams of protein or fat, or how much iron or vitamin A daily – it just tells, for example, whether or not a child may have eaten a piece of fruit this week, or not.   It is better suited to population nutrition studies, where thousands of food intake records are compared between one population group or another.  It is not adequately informative for a study of this type with a small data set of 79 kids, because it doesn’t describe what the kids actually ate.

3) The authors mixed diet strategies in the test group.  Some children were using special diets, some were not.  This is confounding.  In practice, I observe that children with autism on special diets eat more nutritious food intakes than those who are nutrition-treatment naive.

4) Food questionnaires were filled out by parents.  In practice, I find that parents vary widely for how accurately they report what their kids eat.  I routinely facilitate this piece of the nutrition assessment process because parents inevitably make gross errors.  This is a tremendous weakness in the only data actually collected by the authors (other data came from pre-existing health records).

5) The authors were allowed to invent then use their own contrivance, something they called a “food variety score”.   There is no precedent to support that this is a valid instrument or not.

6) The authors refer to growth data but do not include it.  BMI is referenced but excluded.  I routinely find in practice that children with autism fall into growth regression or growth failure, so I was eager to see this information.  The authors instead vaguely state that “Weight and height measurements collected by health visitors as part of health surveillance were extracted from the Avon Child Health Computer database.”  and   “At the age of 7 years, all children in the ALSPAC were invited to a special research clinic at which they were weighed and measured.”  Were the children with autism anthropometrically assessed or not?  Where is the BMI comparison?  What is a “special research clinic” (is it like Dr Wakefield’s infamous birthday party?), and were the children assessed, or just invited to be assessed?

7) The authors refer to hemoglobin data but don’t include it.  I have found many children with autism to be in poor iron status – again, I was eager to read this piece.  The data simply isn’t there and once more, sweeping conclusions are made anyway.  Additionally, hemoglobin status alone is not sufficient to support the statements made here about iron status between these groups. Iron status was not measured; the disparity of size between the two groups is too large to find a difference; and, children with autism who begin diet corrections may correct an iron deficit, thereby further confounding the data.

8 – The authors state that energy (calorie) intakes and many nutrient intakes were comparable in both groups.  But they never measured these.  Energy and nutrient intakes were never actually quantified in the study at all.  Note that none are reported either.  There is an inane table in the article’s appendix that lists several nutrients in a comparison of frequencies of intakes that is oblique at best, invalid at worst.  It looks impressive, with a long list of individual nutrients followed by statistical test measures, but it states virtually nothing.  Odds Ratio (OR) is not a quantity.  This table deceives readers with an impression that nutrients were quantified.  The only accession the authors make about this is in the cryptic title of the table:  “Details of the Diet of Children With ASDs”.  What exactly is meant by “details”?

Another “Dietary Comparison” table in the text lists macronutrients, again giving the impression that these were quantified.  Again the table only gives statistical test measures, not quantities.  Readers are left to simply trust that the authors interpretations are valid; there is no actual data given for us to assess ourselves.

Nutrients intakes were never in fact quantified and compared at all – but the authors make sweeping conclusions anyway about the comparable levels of nutrients eaten by both groups, claiming that there are no notable differences.  This appears to be intentionally misleading.

It’s odd that a journal like this would permit publication of such a poorly done study that appears to have bias built into it. If a diet of wood, rocks, and sand is bad for a typically developing kid, it’s bad for any kid. No amount of busy looking tables can hide bad work – but it’s an old trick in the academic press. Don’t be deterred if you are concerned about your child’s diet, growth, or eating habits. Ask questions and if your pediatrician can’t help, I’d be glad to – use my contact form to get in touch.