Why I Tell My Patients To Avoid GMO Foods 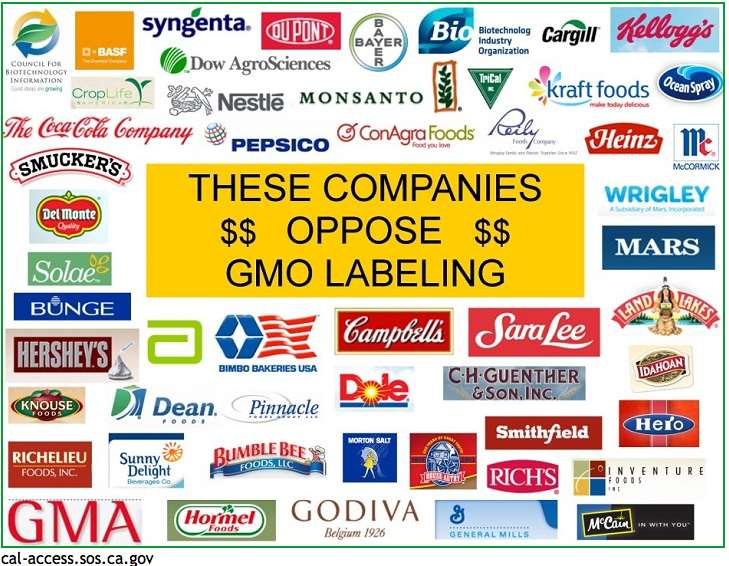 Recently I attended a day-long conference about GMO foods called Seeds of Doubt. There was an erudite line up of speakers from several disciplines, and continents: Among those at the lectern were a medical doctor, a molecular biologist, a soil scientist, an executive from a major grocery chain, a medical molecular geneticist, a certified crop advisor/ former USDA agronomist, an attorney who sued the FDA (successfully), plus two powerful moms who have broken barriers for the health and safety of kids nationwide: Robyn O’Brien, author and former financial analyst; and Zen Honeycutt, founder of Moms Across America. The gathering included a lecture Skyped in from France, a speaker flown in from England, and a moderator just off a plane from India, not to mention others from far flung US locales.

GMO food is an issue that crosses every continent and several disciplines, from health to economics. Colorado votes next week on proposition 105 to require GMO labeling on foods, and I will be voting in favor of this measure. GMO foods have been in the US food supply for twenty years, unfettered by regulation. Read on to see why this was a really bad move, and what the average American consumer probably doesn’t know.

• At least twenty-six other nations ban or heavily regulate GMO crops and foods. The US is alone in the industrialized world in so freely permitting their use and release into the environment (you can’t take a gene back, once it’s loosed). Shipments of wheat, corn, and soy from the US have been rejected around the world repeatedly. Other nations recognize that there are unanswered questions about the safety of GMO foods.

• Based solely on a Monsanto attorney’s input, in 1992, the FDA classified genetically modified foods the same as conventionally raised crops – even though GMO crops are transgenic, which means that they have genes from other species artificially inserted into them. While genes between plants have been shared for centuries, mixing genetic material across plants, animals, and microbes is recent, unconventional, and unstudied in terms of health effects.

• Because the FDA declared GMO foods to be the same as conventionally raised foods, this permitted GMO foods a loophole: They thus acquired “presumptively GRAS” (generally recognized as safe) status. GRAS status exempts products from pre-market approval requirements like safety studies. With the stroke of a pen, GMO foods freely poured into the US food supply – with no safety data, and no awareness for consumers.

• GMO food crops are modified to tolerate double or even triple the amounts of Monsanto’s patented herbicide RoundUp, and are thus called “RoundUp Ready.” They are also modified to produce a pesticide called Bt toxin, inside the plant’s own tissues. While Monsanto touted that this technology would reduce pesticide use, it has had the opposite effect, with a dramatic rise in global pesticide use reported. This makes GMO crops even more toxic than non-GMO crops. The American Academy of Pediatrics has published findings that agricultural chemicals are linked to ADHD in children.

• Bt toxin, meanwhile, kills pests by perforating their stomachs. Whether this can also cause leaky gut in humans remains unresolved. While Monsanto claims that this can’t happen because the human gut is too acidic, they overlook the fact that US infants are prescribed reflux medications at record rates – a strategy that buffers the gut dramatically. And, several of the top thirty prescriptions for US children are antibiotics, which can also buffer the gut environment. Evidence that Bt toxin genes may migrate to human gut bacteria has already been published – thus transferring the ability to produce this toxin directly in our own intestines. More on transfer of GMOs into the human gut can be found here.

• The overuse of herbicide has also created super weeds that now threaten food crop production, as the herbicide-resistant genes spliced into food crops have spread to weeds nationwide.

• RoundUp’s active ingredient, glyphosate, appears to be linked to multiple health problems in emerging research. Monsanto claims that glyphosate is harmless to humans, because we do not have the metabolic pathway that it targets to kill plants. But, the beneficial bacteria in our intestines do have this pathway, and glyphosate can markedly disrupt our beneficial gut bacteria in the same way that it kills its target plants. The human biome is a rapidly emerging area of research, and we already know that this biome is crucial to our health. Glyphosate, an endocrine disruptor, is easily absorbed from the gut. It also binds essential nutrient minerals like iron or manganese, making them less available to the host. Some research correlates the advent of GMO foods in the US with the alarming rate of new autism and celiac diagnoses (click either graph to enlarge): 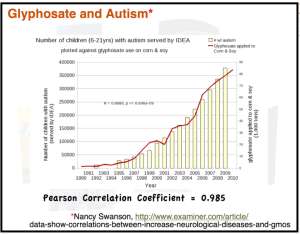 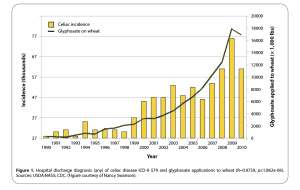 One of the first places where GMO foods popped up was in infant formula and processed foods marketed to children. Corn and soy, the first major GMO crops in the US, are found in most any processed food. They appear as soybean oil, corn oil, high fructose corn syrup, modified food starch, corn starch, lecithin, soy protein, or textured vegetable protein. This means that since 1992, infants in the US have been drinking GMO formula. Humans are born with a leaky gut, which healthy gut bacteria gradually tone toward normal digestion. But does this process break down when eating GMO formula? Does it explain the explosive rise in allergies, Crohn’s disease, celiac disease, and other gut and immune problems in children, since the 1990s? At least one researcher, Stephanie Seneff PhD of MIT, believes there is a link. Click here to watch an interview with her.

If I haven’t swayed you yet, there is plenty more about GMO foods that does not add up to a green light for our kids – who are now more saddled with more chronic disease and disability than ever before (more than half of US kids have one or the other). At the very least, consumers need to know if genetically modified organisms are in their food, and have the right to not buy them. You know this is here to stay when General Mills decides to pull the GMOs out of Cheerios, and when McDonald’s is looking at organic foods. If there is one thing you can manage for your family’s health, avoid GMO foods as much as possible.

Look for this on food labels to avoid GMO ingredients & foods