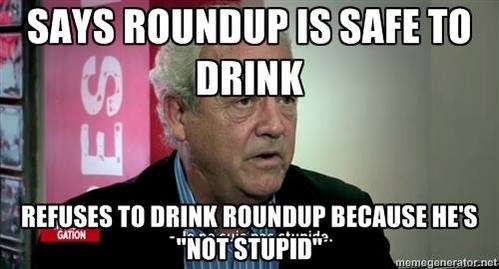 Toxins in our food and water have major impacts for the health of kids nationwide. But these toxins aren’t well regulated or controlled.  Since 1990, these have increased dramatically in our air, water, and food. Children are especially vulnerable. Are their immune systems able to handle it? If the health of children in the US is a barometer, the answer is no. More children in the US are now chronically ill or have a disability, than children who are well.

In the clip below, a concerned Nebraska farmer challenges stone-faced fracking lobbyists to drink the water that they tell residents is safe. (What exactly is fracking? Learn more here). Here in Colorado, where I live, we’ve heard the same mantra – most famously, from our goofily named former governor Hickenlooper, who claims to have sipped fracking fluid in a closed meeting with Halliburton officials (this has earned him the nickname “Frackenlooper“). Even the Washington Post went so far as to assert that because fracking fluid and ice cream, toothpaste, and laxatives have some of the same ingredients, it must be safe to drink fracking fluid.

What is fracking fluid? It’s a chemical mixture blasted into shale rock to force out the oil and gas locked inside it. It uses a lot of water, and this is one of the problems with fracking: In areas where water is scarce but shale oil may be found, it not only wastes an awful lot of water, it also contaminates clean ground water. Fracturing shale rock can cause oil and gas in it to escape into ground water (Colorado alone has thousands of unmonitored wells that may be leaking into groundwater, like this one). Fracking fluid is about 90% water, plus some sand, plus proprietary blend of chemicals that include potent acids (to dissolve rock), volatile organic compounds like benzene or toluene (known carcinogens), ethylene glycol (fatal in doses as small as 4 ounces), and many others. Oil and gas companies are not required to disclose exactly what is in the fluids they use, recipes for which may vary by location. Fracking activity is exempt from federal laws that set clean water standards (thanks to the “Halliburton Loophole)”, which allows the oil and gas industry operating in your area to legally and freely contaminate your water supply.

So far, there aren’t any industry takers on publicly drinking the stuff. Unwitting citizens don’t have a choice but to sip, shower, and drink it every day, because that’s all that comes out of the tap. Those whose water has been poisoned by fracking can get a lawyer – but don’t have much recourse otherwise. Here in Colorado, because of arcane and dated mining laws written in the 1800s, it is legal for an oil and gas company to frack right underneath homes, schools, or any other place they please, with impunity for toxic effects on people, animals, crops, or water. Local governments in Colorado quickly and willingly cowered to industry pressure in recent years, effectively removing any legal barriers to resource extraction in our towns by outside corporate interests. Setbacks to keep fracking wells at least a few hundred feet away from a home or a school may not be enough, as suggested by a recent study that found more birth defects, still births, and low birth weight babies born to women who lived in the vicinity of fracking activity.

Watch the silence as these pro-frackers are offered  a glass of their own elixir:

A similar challenge in recent years was placed before Monsanto spokesperson Patrick Moore, in an interview with a French television journalist. Mr. Moore makes the off-hand comment that it’s safe to drink “a whole quart” of RoundUp, the glyphosate pesticide that GMO crops need by the ton (they actually need more RoundUp than non-GMO crops, despite promises years ago that one of the many “miracles” of GMO foods was going to be that they would reduce pesticide use. Didn’t happen). Monsanto owns both RoundUp and patents on several GMO seed crops, and obviously wants to continue selling both. But when challenged to make good on his claim that RoundUp is safe to consume by the quart, Mr. Moore loses his cool, insults the journalist, and ends the interview. Since then, Monsanto has been snared in multiple law suits, and was ordered to pay millions to a school groundskeeper who contracted cancer after regularly spraying its grounds with RoundUp.

Here in the US we have 21 states actively fracking with no meaningful safety oversight. We have twenty years of GMO crops freely grown and consumed in the US (but not in other developed nations) without so much as a labeling law, never mind safety studies (click here to learn why I tell my patient families to avoid GMO foods). There’s no doubt that this has already put a generation of children at risk. It’s also no wonder that our children are more sick and disabled than ever in our history as a nation. What kind of future can our country have, when corporate rights supersede our children’s rights?
But that’s not all our kids face when it comes to insurmountable, unavoidable toxic exposures. Vaccines are so full of toxins, our Supreme Court ruled them to be “unavoidably unsafe” with a sort of “too bad, so sad” decision in 2011. Devastated by vaccine injuries and left with life long disability including autism, Hanah Poling received a payment from the US Department of Health and Human Services Vaccine Injury Compensation Program of 1.5 million dollars as compensation for her injury (a lot less than usual medical malpractice awards, by the way). Her parents (a neurologist who has received National Institutes of Health grant funding in his career, and a nurse) went on to pursue a civil case based on the fact that the product that injured their daughter was unsafe. But the Supreme Court disagreed. It basically said, yes, vaccines are unsafe at times, and families just have to take that risk, so… shrug.
Paul Offit, academic (non-practicing) pediatrician who has made millions on vaccine patents, stated that it’s safe to give babies ten thousand vaccines at once many years ago. A lot of people challenged him to be first in line on this. There’s even a Facebook page devoted to Offit’s outrageous claim. So far, he has followed the trend of his peers in other industries: He has declined to drink his own Kool-Aid.
We have industries operating outside of a regulatory context in such a way as to expose our children to an unprecedented flow of toxic substances. We have over a million children with autism in the US today. Did toxins play a role? Are these toxins ok because they are given in such minute doses over time? Watch the film Trace Amounts to see why this may not be the case. Or listen to MIT scientist Stephanie Seneff explain why she believes glyphosate causes autism. Our kids have more cancer, diabetes, allergies, asthma, disability, and chronic illness than ever before. Until our elected officials can stand up to corporate interests for change, it’s up to parents to protect our children, with the cleanest, most toxin-free food, water, and health care we can afford. Visit Moms Across America and Fearless Parent for resources and info on keeping your kids as healthy as possible.