What’s For Lunch – In China? 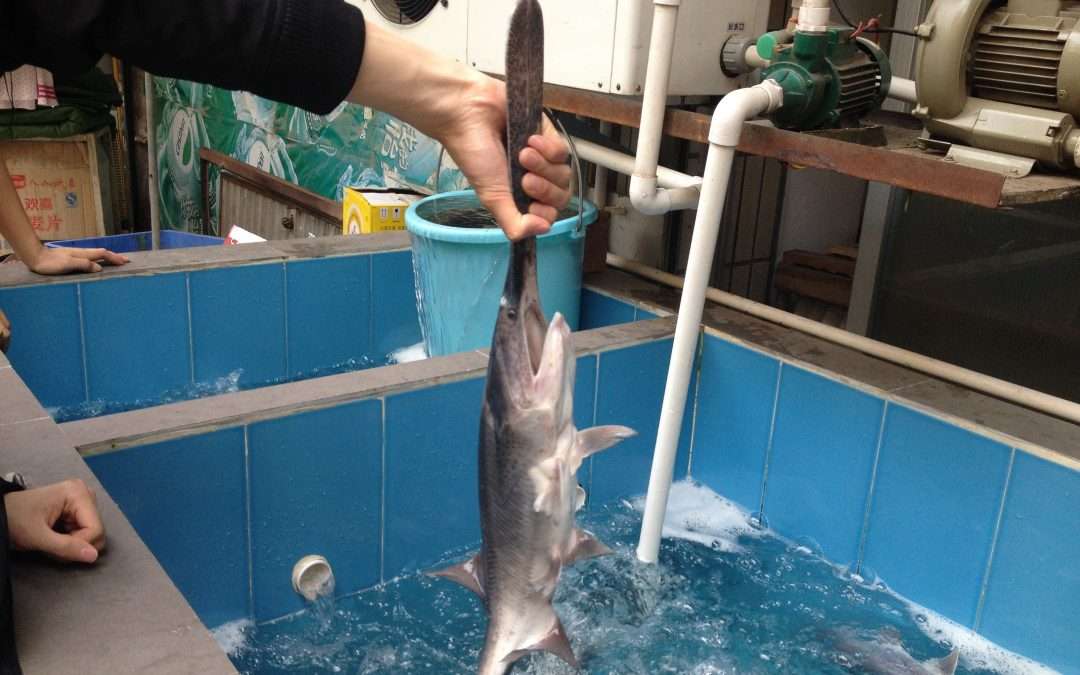 Every so often my husband travels to China for work. I’m always fascinated when he shares pictures of food and what people eat there. It’s so different from what Americans eat. Sweets are rare, and baked goods unheard of for the most part. This factory lunch (cashew chicken, baby bok choy, rice, and scrambled egg) was served during a work day, and it cost about seventy five cents in US currency. No gluten, no processed fats, no GMOs,  no additives or sugars. This fresh food was prepared on site, and is the sort of stuff usually reserved for wealthier shoppers at stores like Whole Foods in the US. Another cool thing? My husband looked on in surprise as all the office workers put their heads down on their desks for a brief nap after lunch. Meanwile, many working Americans are limited to rushed eating from food deserts that sell only sugary, trans-fat, artificial, processed convenience food. 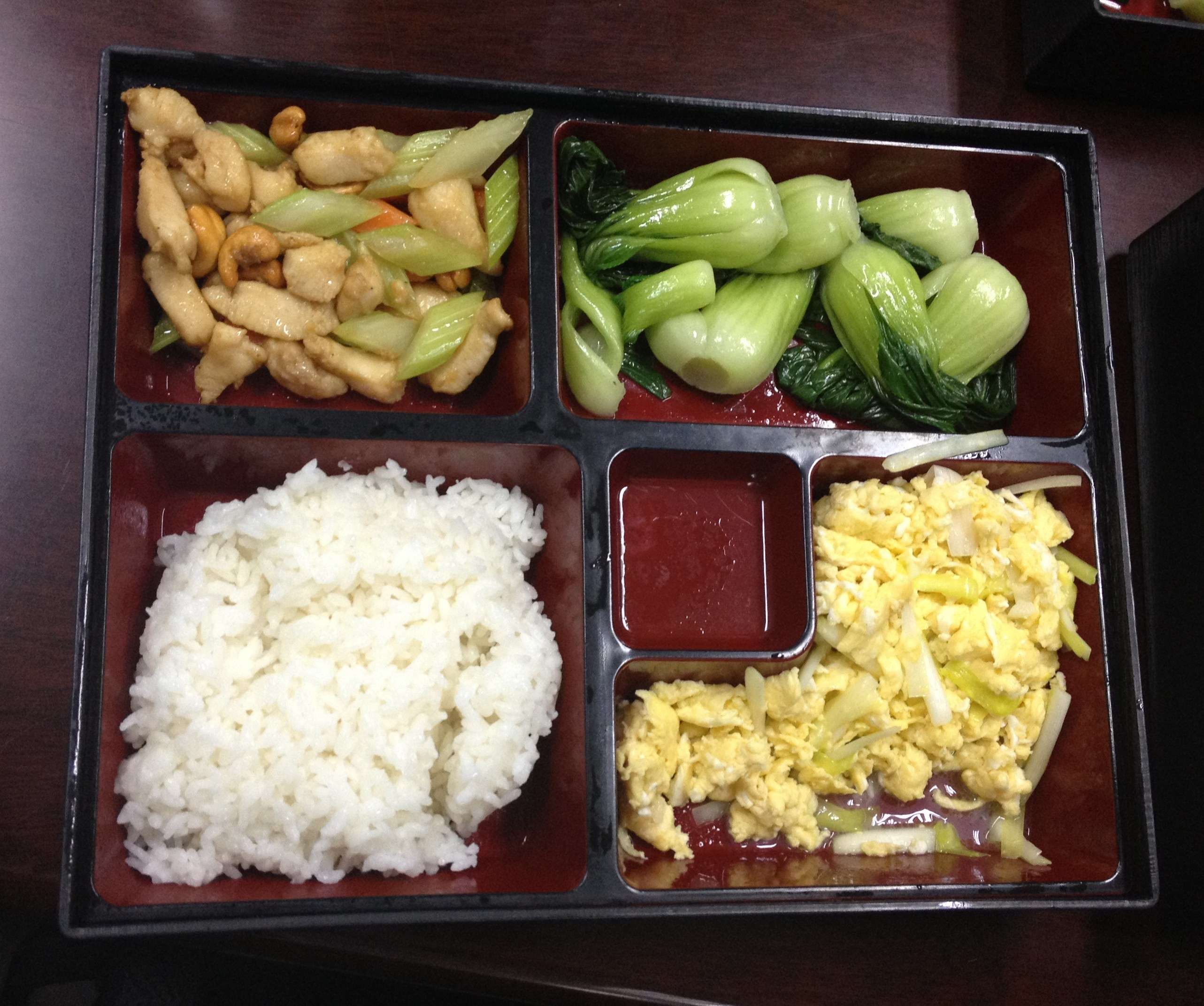 A middle class is taking shape in China. More Chinese nationals can afford to buy stuff, or take weekend trips to Hong Kong, which is about two hours by train from Shenzhen, the pollution-choked maze of factories where my husband’s work takes him (and where just about everything you buy is made). By the way, if you believe that environmental regulations are too burdensome for businesses, spend some time in Shenzhen. You’ll be glad to return to the US, where breathing does not routinely singe your throat or chest, and rotting trash or wafting sewage don’t color most every stroll.

Despite the dirty air and streets, my husband says he can feel energized while working in Shenzhen. Besides enjoying the cheerful and generous demeanor of his Chinese counterparts, he is convinced it’s because of the food. Even though our household is a mostly organic, non-GMO one with lots of real food prepared daily, he notices a difference when in China. There is virtually no processed food, and GMO foods are not yet fully permitted. Everything is fresh and sourced locally. The idea of eating previously frozen meat, or beef grown in one country then shipped to another to be processed, was a shock to his co-workers. The meat and fish that his Chinese co-workers eat walks or swims right up until meal time. Here is a duck fish plucked from its tank just prior to cooking: 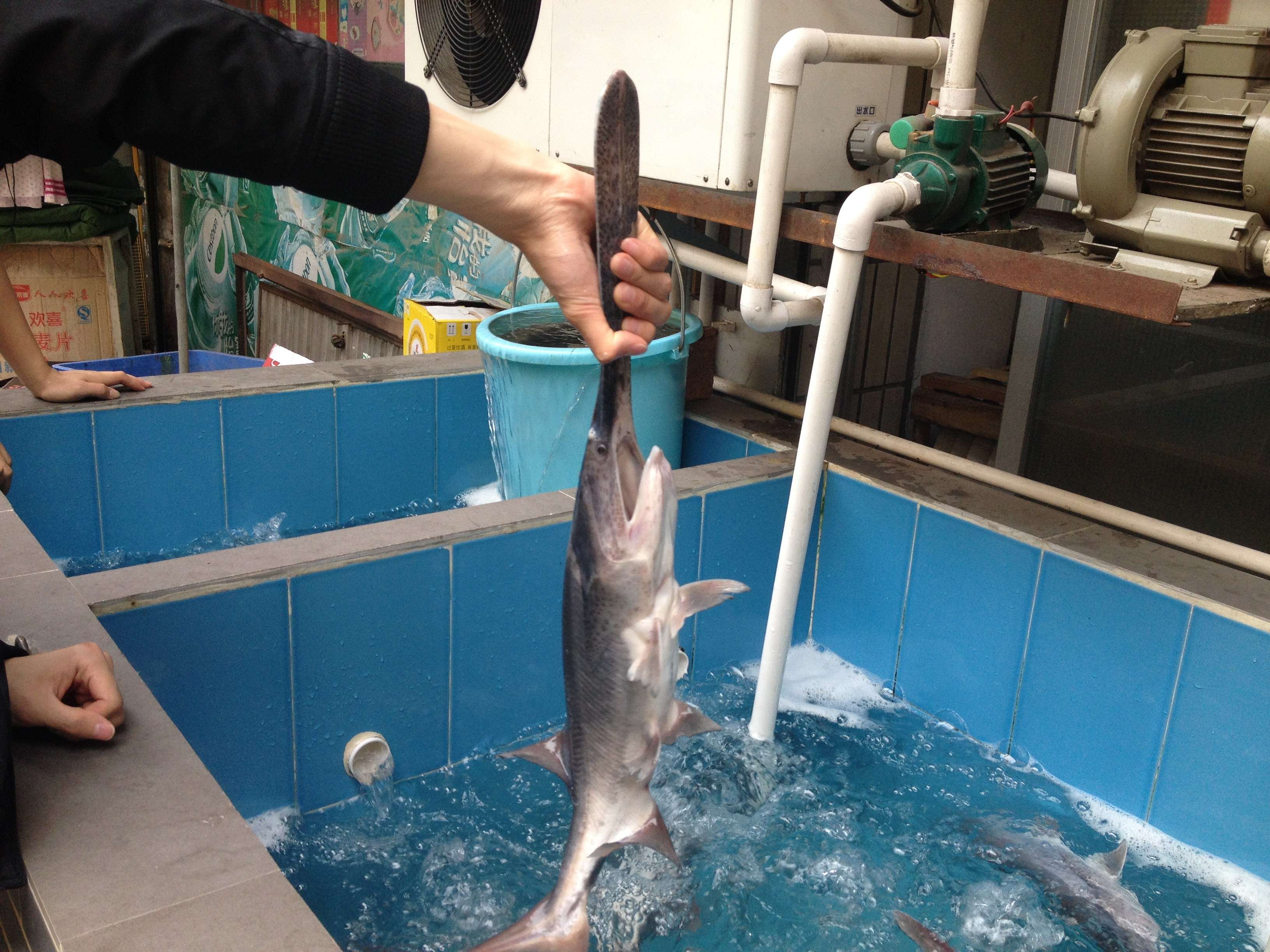 It was served ten minutes later as a stew, cooked right at the table of a nearby restaurant, for another work-a-day lunch: 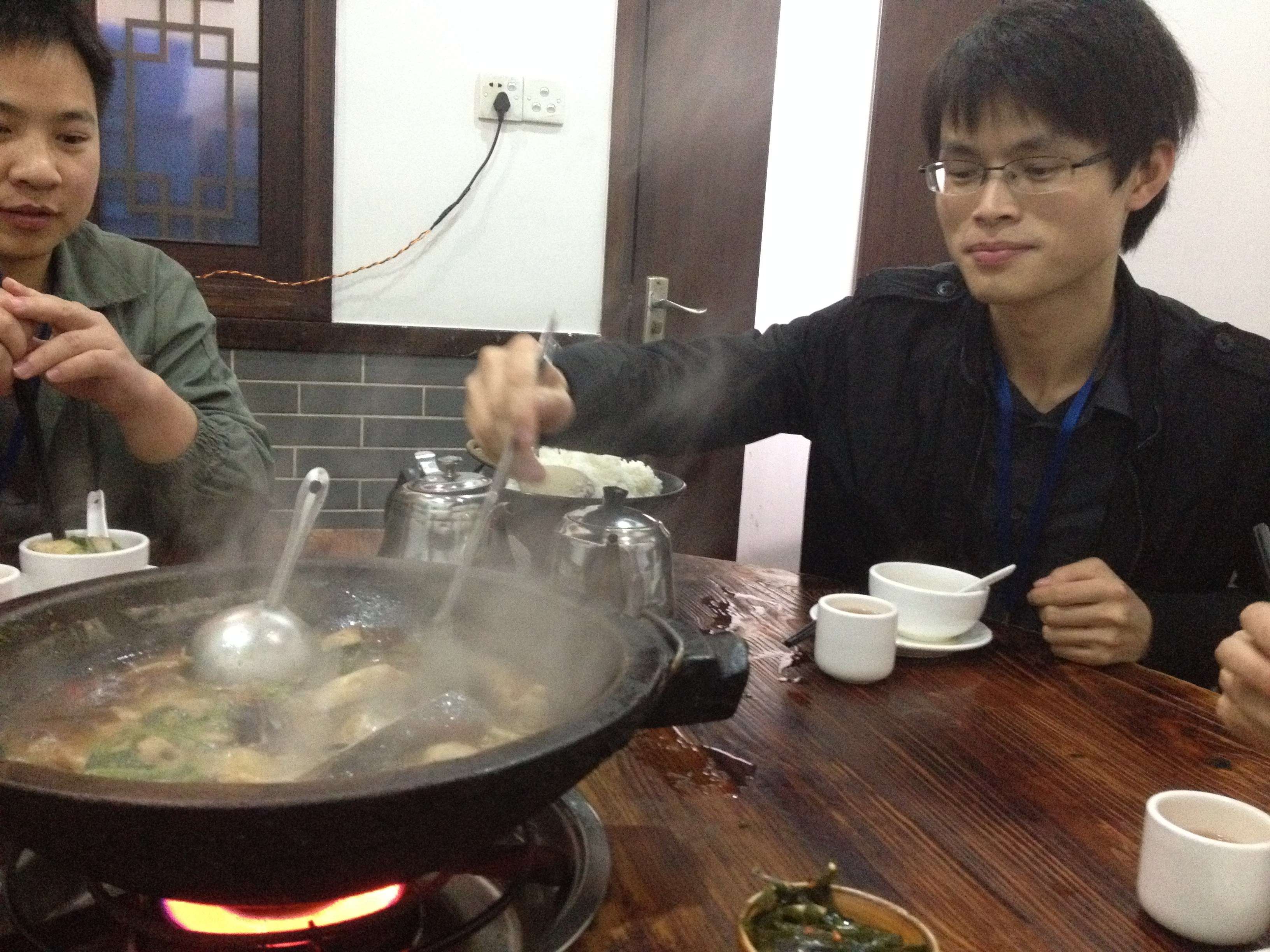 Despite meager wages and a decidedly gritty urban environment, China’s working class is able to access fresh whole food. Unlike America’s working poor, who are challenged by food deserts that span neighborhoods or regions, Shenzhen workers can tap an outdoor market where every conceivable fresh food item can be purchased. Here’s eggplant, potatoes, tomatoes, cucumbers, and different types of peppers… 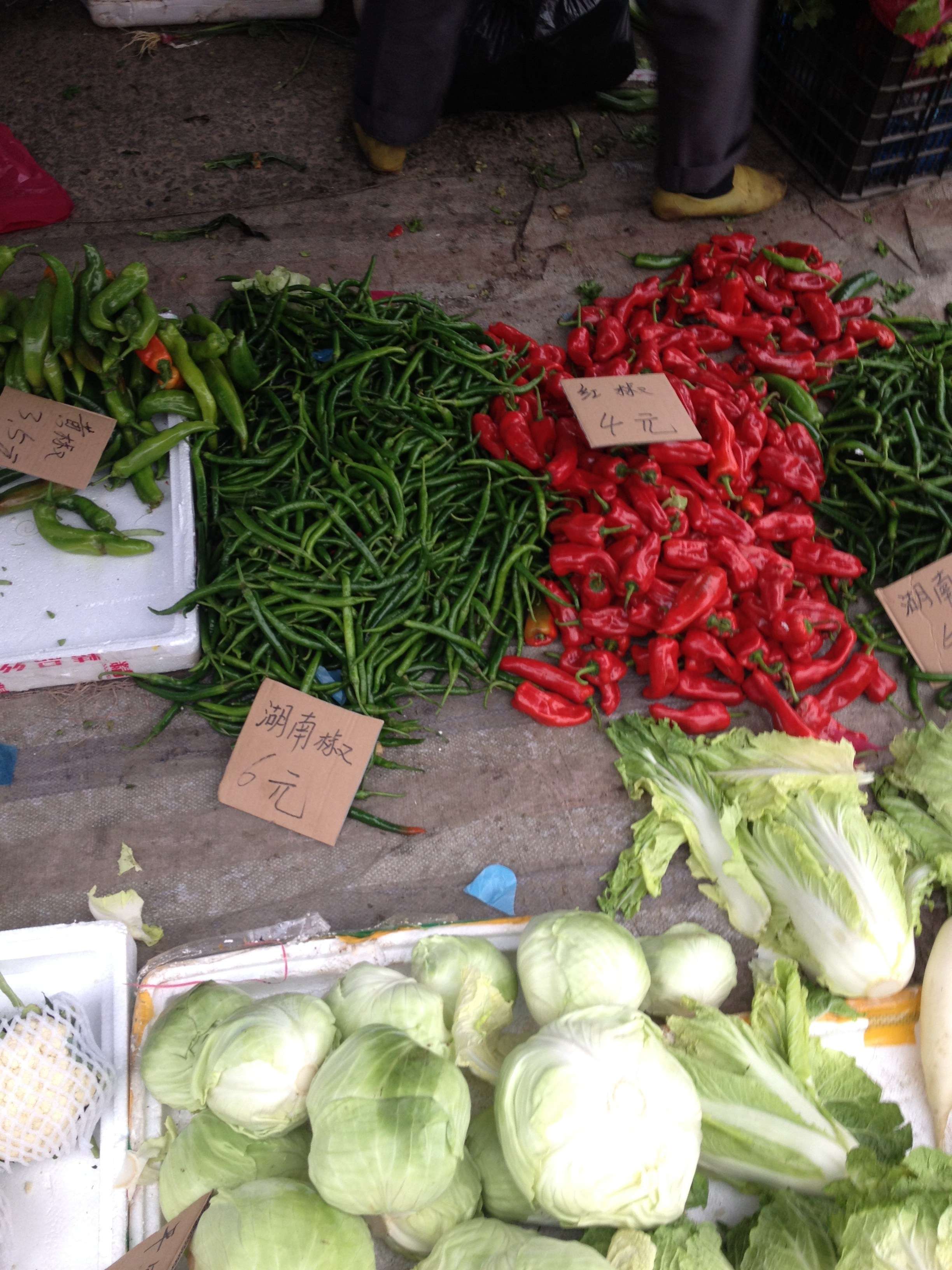 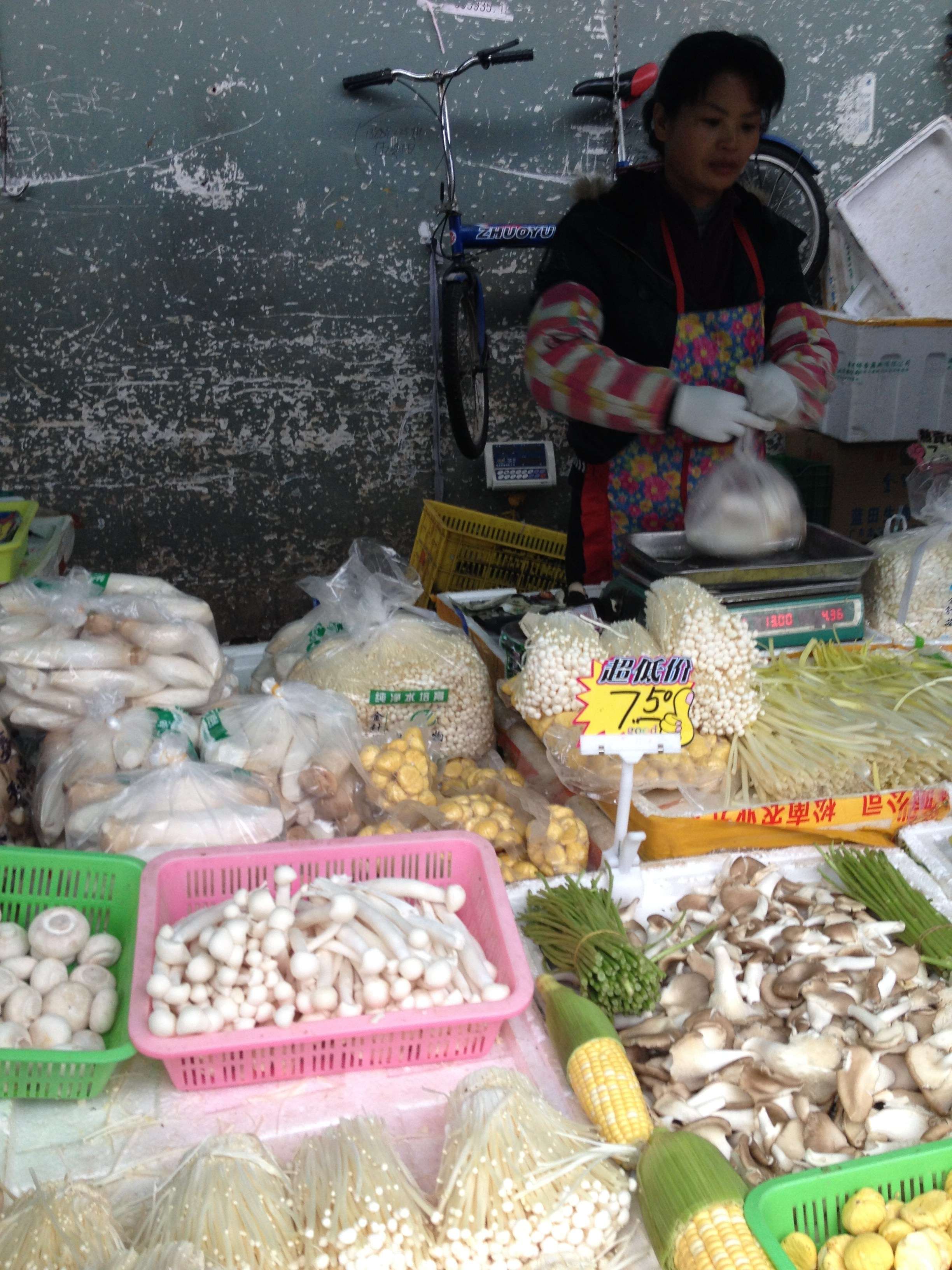 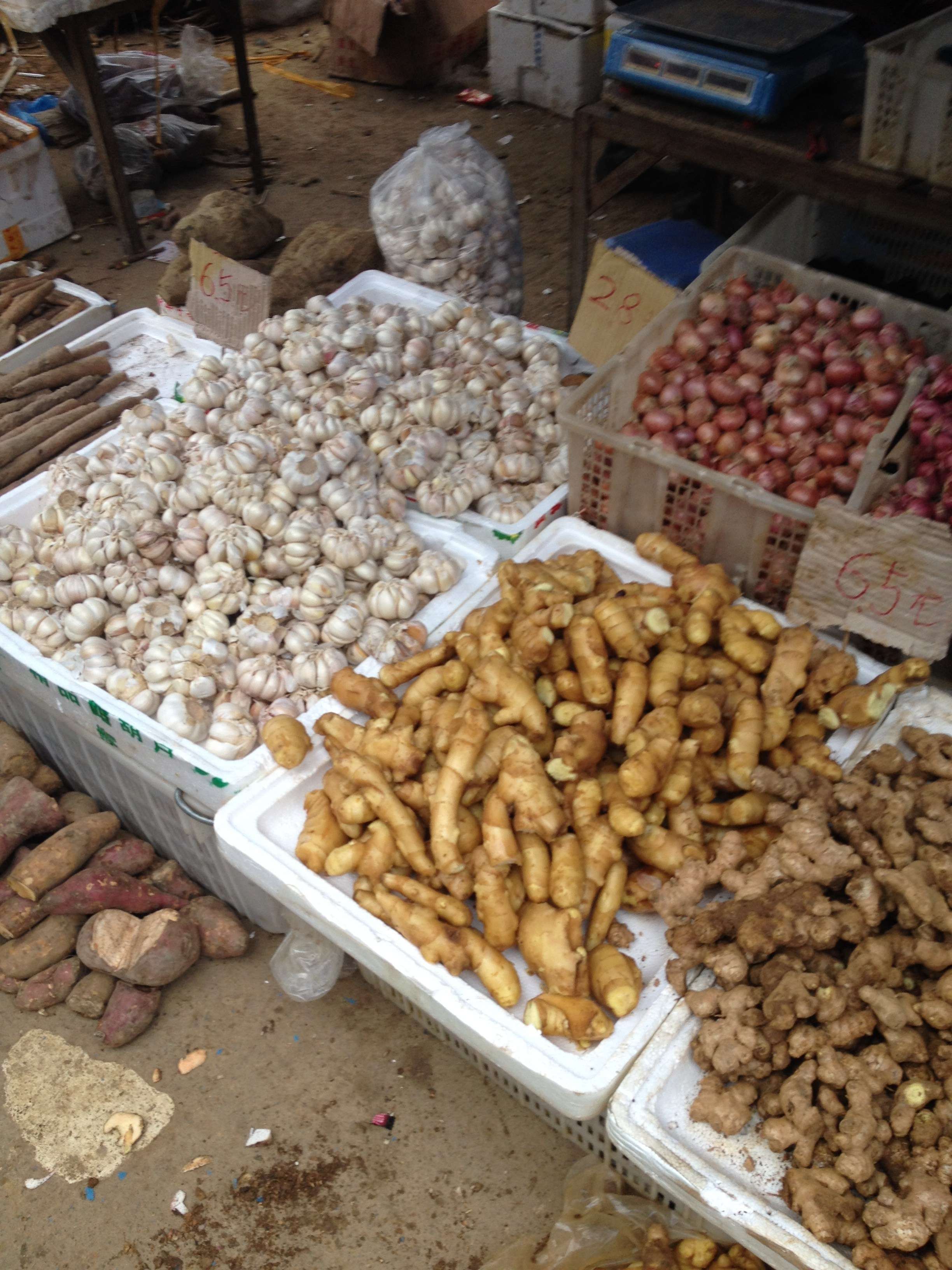 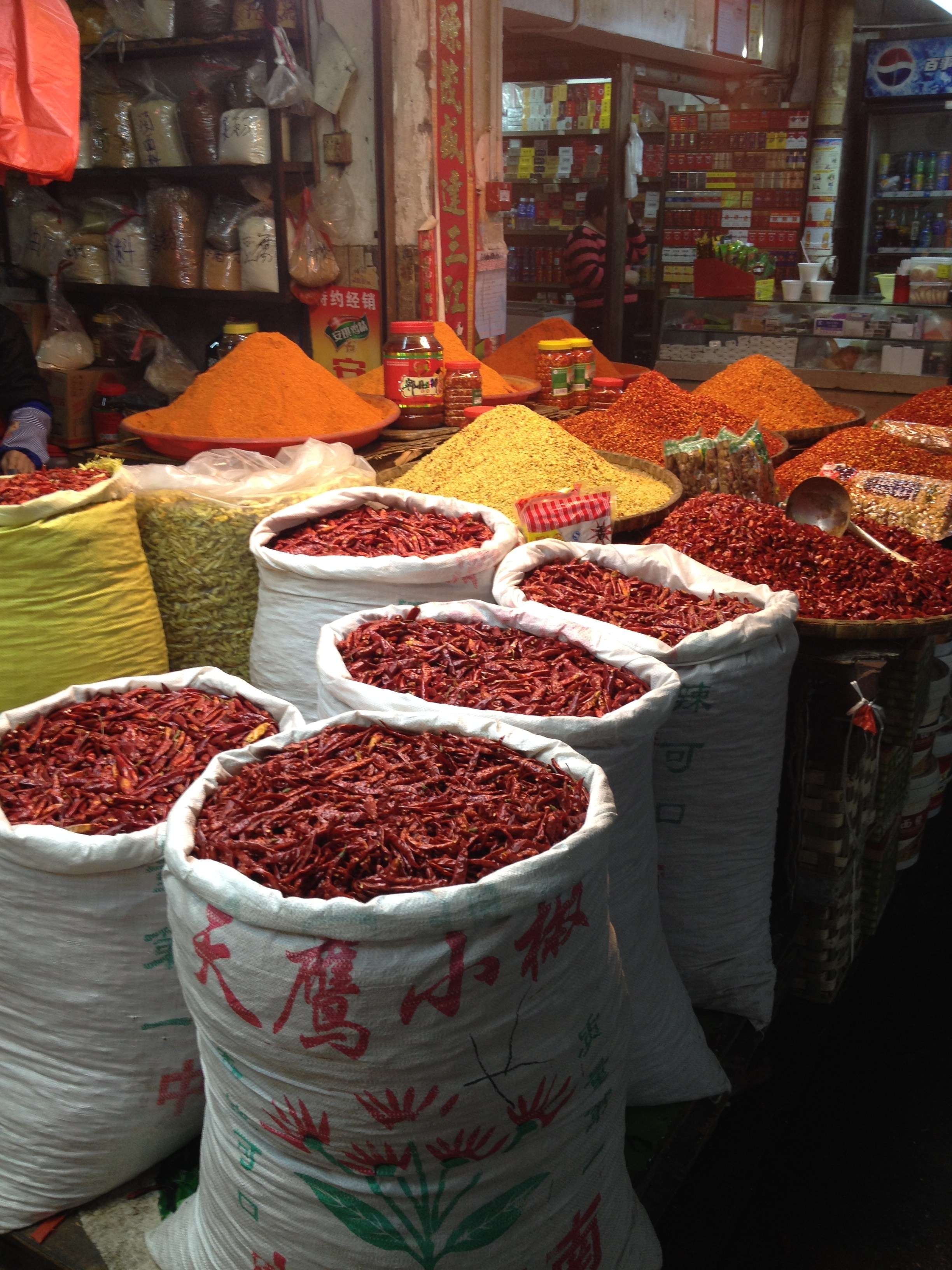 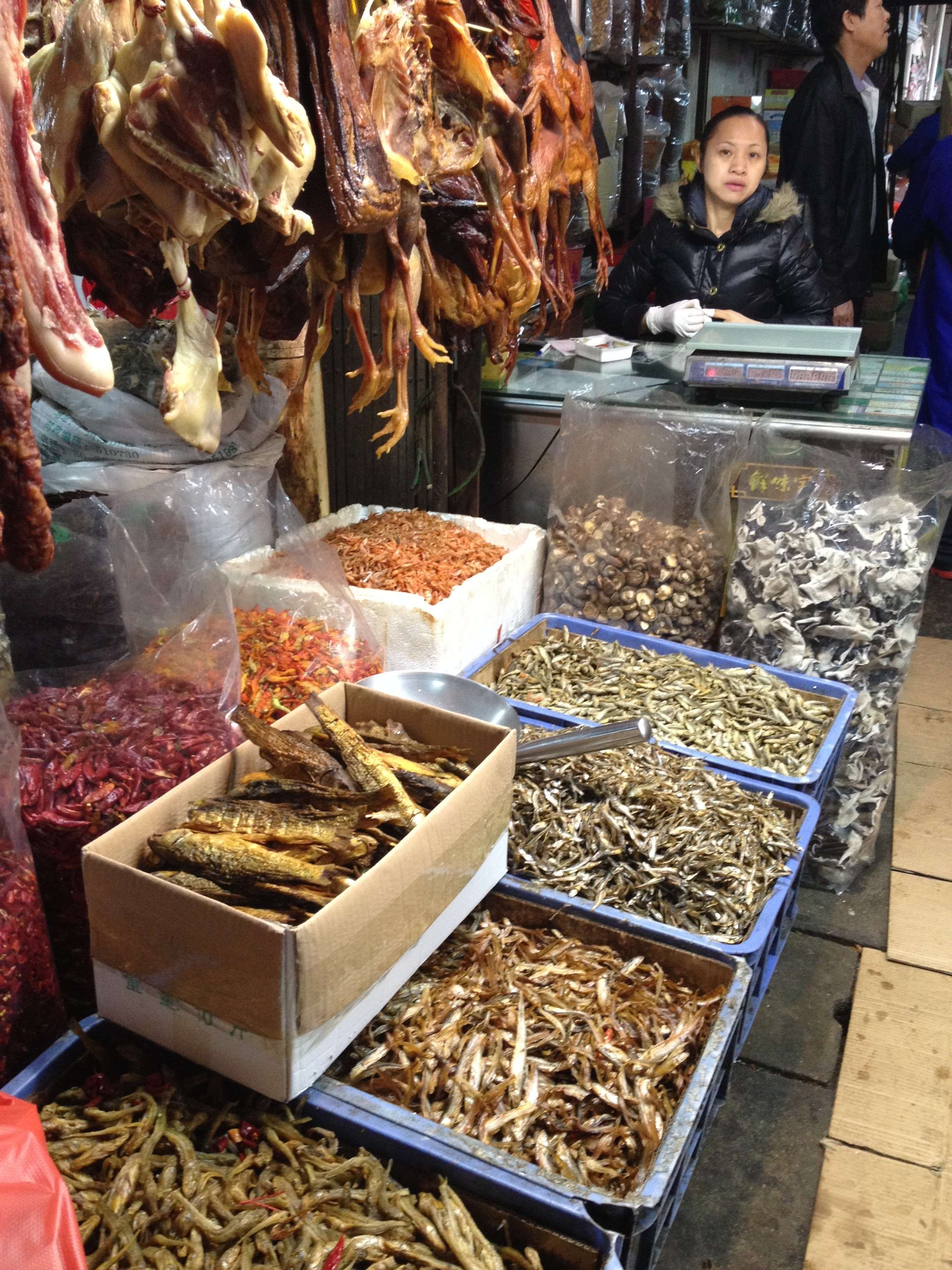 The market covers about an acre, and conditions are rustic. There are fresh meats and chickens as well: 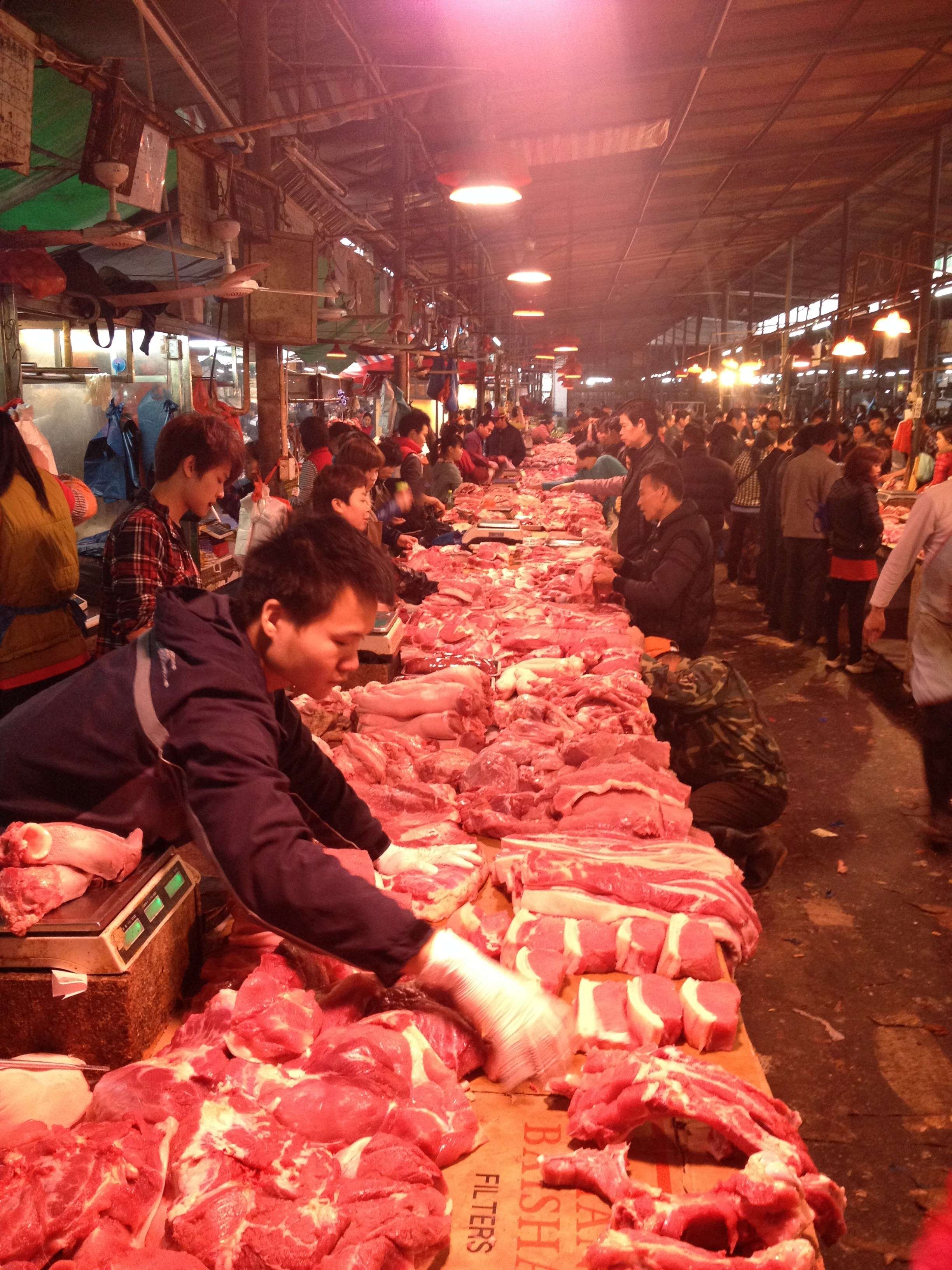 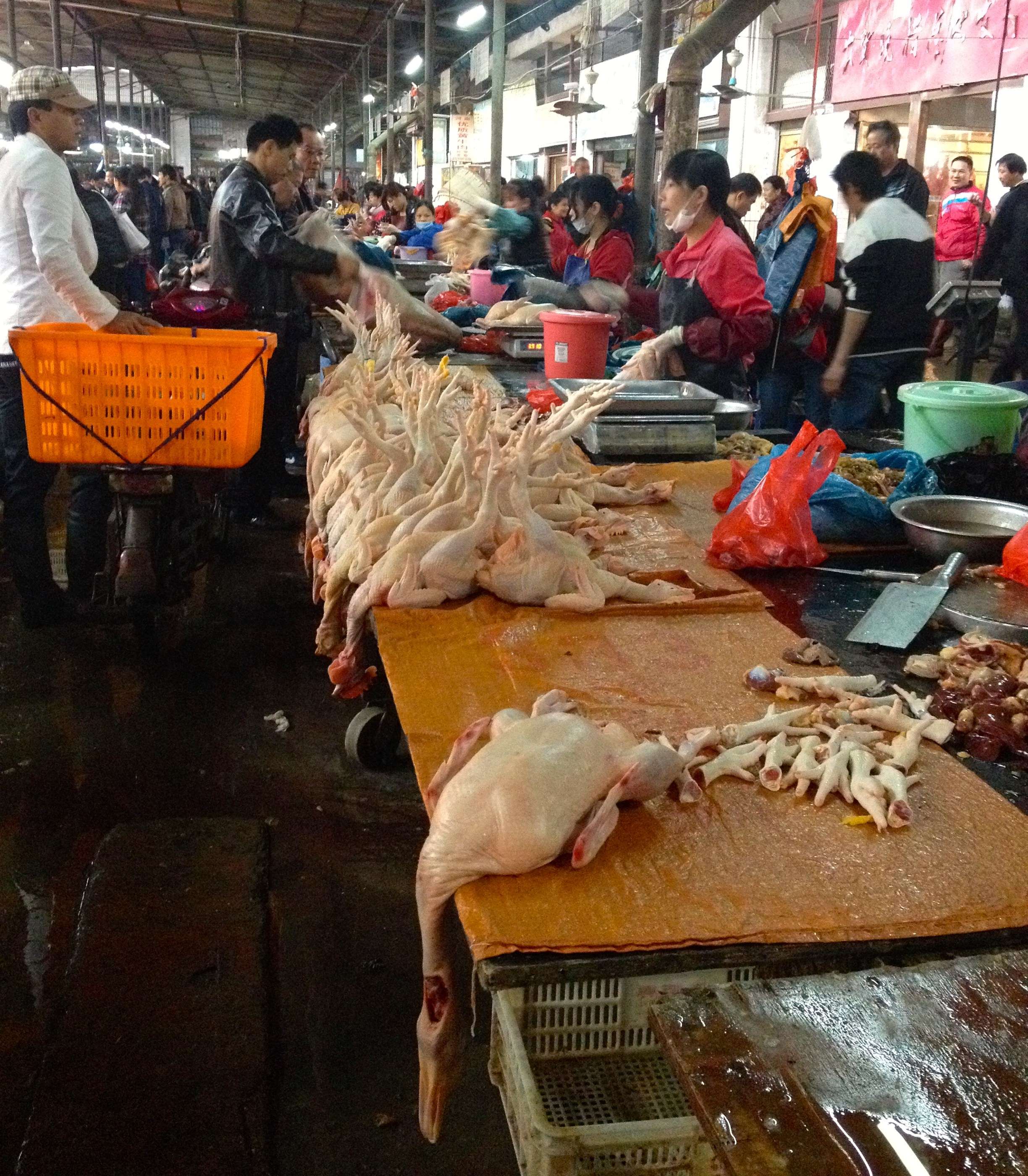 One night a celebration was had at one of the factory workers’ homes. My husband was honored to be included. Their spartan kitchen had a small cold-water-only sink, and one plug-in burner. A dorm-sized refrigerator was there too. This is the entire kitchen, where a visiting neighbor joined in to prepare the meal: 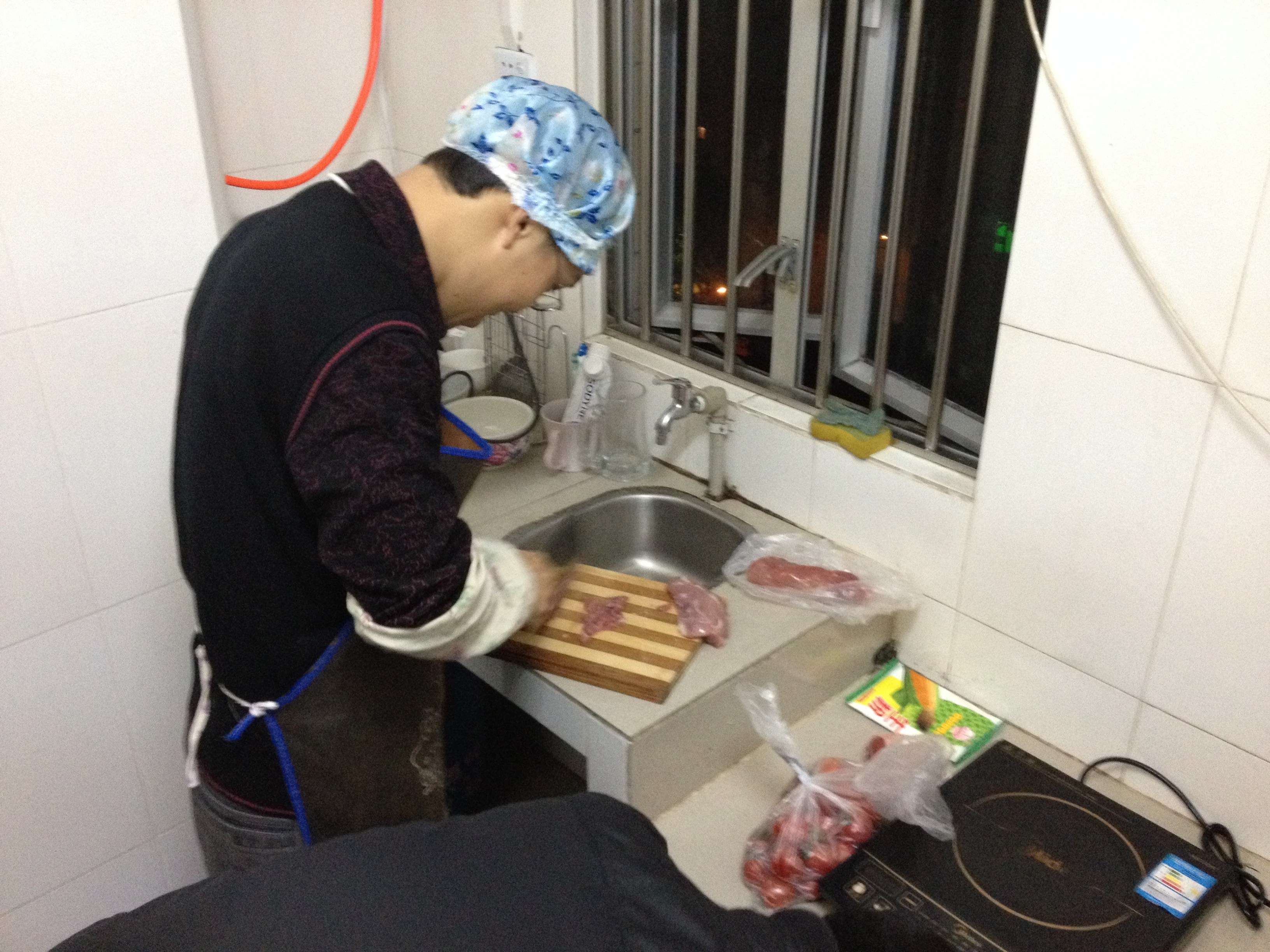 So tiny was their apartment, the vegetables had to be prepared in the bathroom doorway. 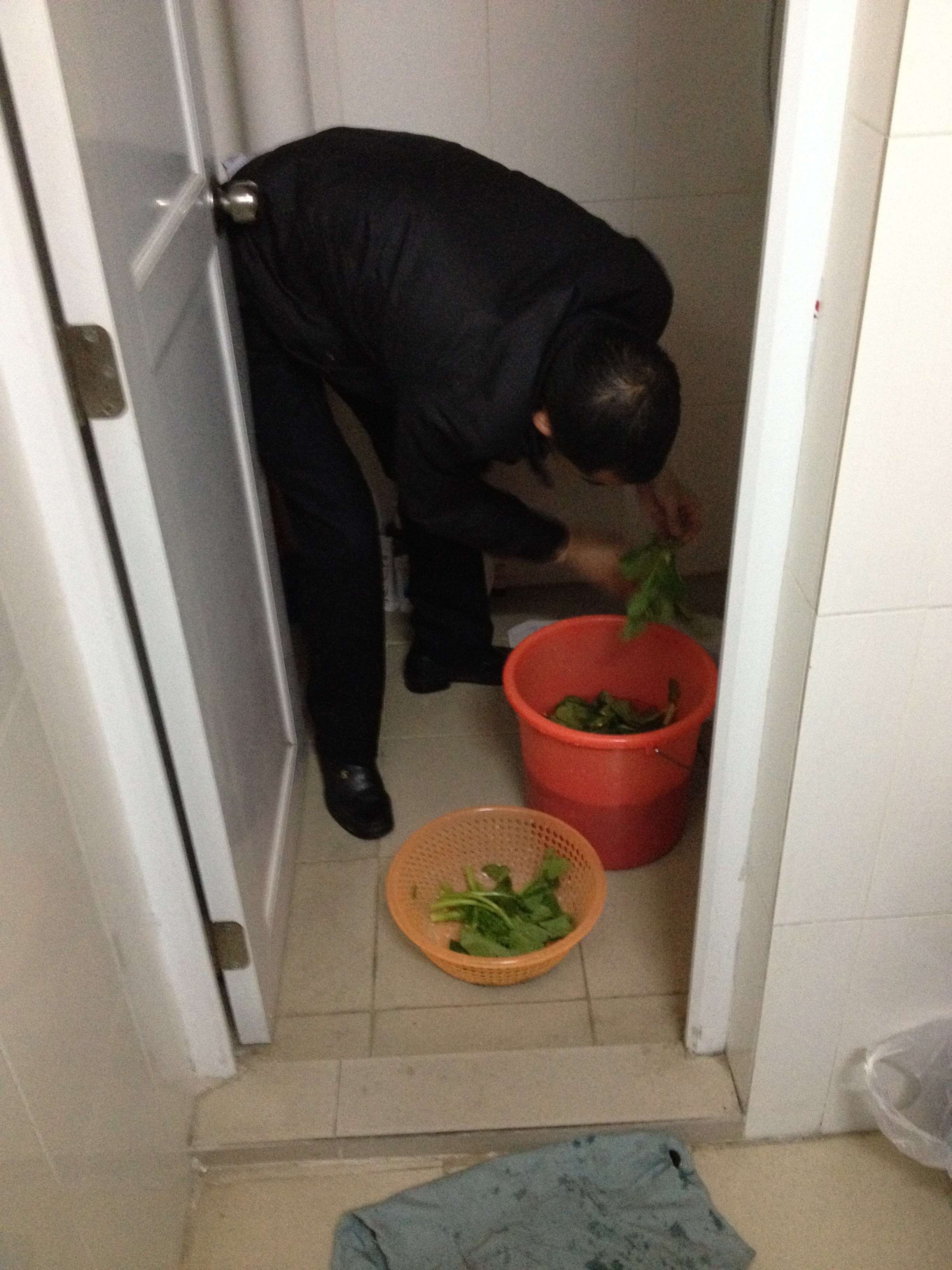 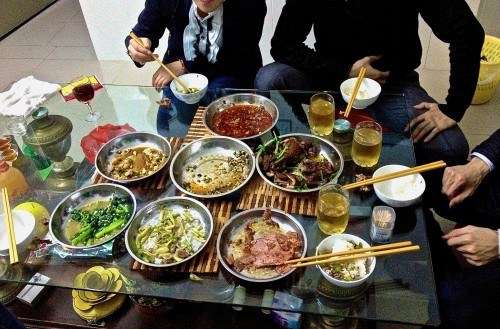 Isn’t this humbling? Many of us in the US have kitchens with microwaves, one or two ovens, four or six burner stoves, tall refrigerators, freezers, disposals, and cabinets full of mixers, blenders, toasters, food processors, juicers – but still find preparing real, whole, fresh food every day too hard to do. 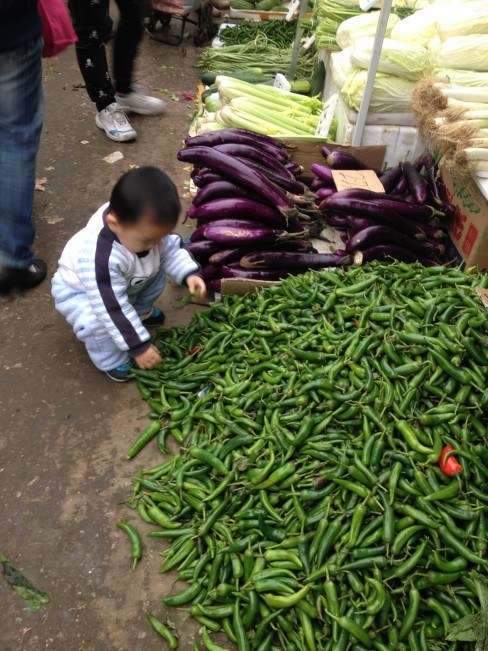 With all the hubbub in academic circles now for the human biome and how crucial it is for brain and immune system development, it’s interesting to see that very young children here are free to explore in spaces that would have most American mothers swooping their toddlers to safety.

China is experiencing rapid changes in its economy and social structure, as it mingles more with the rest of the world in its eagerness to cheaply manufacturer everything we want to buy. Pressure is mounting for the Chinese to accept GMO foods as well, but government officials are finding resistance. I hope China can keep its rich and diverse food culture in tact.